Last updated on January 21, 2020 by Balaji in AeroLeads, Alternatives 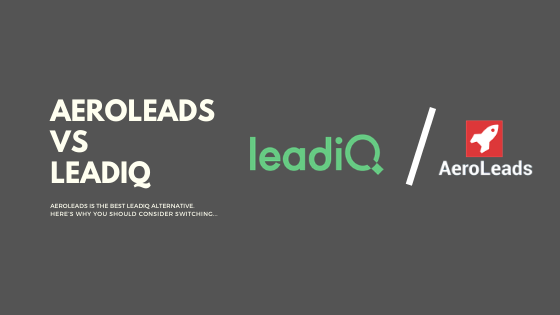 If we ever had a time machine today, the B2B companies would rather go back in time and use today’s advanced technologies to shoot up their lead production and crack more deals! It’s a fact that humans have invented this software and extensions that prospect much smarter, construct the lists in minutes and research through an ocean of database. Gone are the days of cold calling and waiting for the whole day for a reply! The truth is that companies, no matter established or a start-up, cannot run without these tools! But problems change with time. At this juncture, a big question mark stands at the end of “Which is the best?” To make your day easy, this article will compare LeadIQ & AeroLeads to find out why AeroLeads is the best LeadIQ alternative.

Mei Siauw, Co-Founder and CEO of LeadIQ, aptly quoted that LeadIQ is where your next deal starts. It is a prospecting and sales enablement company, making it easy for Sales Development Reps (SDRs) and Account Executives (AEs) to find data online and use it to reach out to the prospects more efficiently. Being the best competitor of LeadIQ, AeroLeads offers the same features as the popular B2B contact data vendors. LeadIQ claims to have the richest B2B database. Though having a huge database is a boon, quality matters a lot. LeadIQ claims to consists of 50+ million business email addresses and 30+ million direct dials, adding more than 200,00 contacts every day.

AeroLeads database is rich and healthy too! AeroLeads has a database of 45+ million email addresses and contacts that are fully verified which makes AeroLeads a worthy LeadIQ alternative. The email finder and verifier tool give a percentage at the end of the search, giving you a hint, whether the email address is fake or not!

During the process of comparison between AeroLeads and LeadIQ, we will judge them on the basis of the following categories and declare the winner after each round! These rounds include database size, pricing, and special features. This article will decide which one of the above is tailor-made to suit your needs!

Points of Comparison between LeadIQ And AeroLeads

As fas as the pricing for LeadIQ is concerned, it is different for the prospector and scout feature. It offers two plans: – a Basic Plan and a Team Plan. The basic plan starts at $60/month, per user. It grants you 300 standard credits and 30 premium credits per month. The Team Enterprise Plan affords you Unlimited standard credits and 100 premium credits per seat, per month. It allows you to add members to your team. The more members you have the more premium credits you get to share. Team Admins may set credit use limitations, see credit usage reports and assign others to be Admins as well. LeadIQ does not have a free version.

While all this is solved in the case of AeroLeads. The trial version of AeroLeads grants you 10 credits to search for your prospects. You can use the free accounts as much as you want but they do have limitations on usage, results and do not allow features like exporting data to other services like Mailchimp, HubSpot, and Salesforce.

TAKE OFF: Starts at $49/month, one can easily add 500 records, find emails, full name, company name, Phone Number, URL, and Title of Prospect. One can import data from CSV and Export to CSV. Basic email support will be provided!

CLIMB: The most popular plan as claimed by AeroLeads, adding 1650 records every month, enabling users and all the above-mentioned features.

CRUISE: Adding a massive number of 6000 records, this plan allows unlimited users at one time.

ENTERPRISE: – AeroLeads has a dynamic and flexible feature of allowing the customers to quote their own price and demand. Just email them with your specific requirements and you will get the best price!

A trial version to test out all the features along with flexibility in plan pricing may turn out to be a game-changer for many companies giving AeroLeads a distinct advantage.

Both AeroLeads and LeadIQ have a chrome extension and Developer API. The Scout feature of LeadIQ grants access to addresses of millions of people while browsing through company websites. It also provides Pipeline Management, Data Management, and Lead Management. Built for developers, access one of the world’s largest B2B datasets of prospects via our business intelligence API. Add contact data, company info, and social media info into any technology with a few lines of code.

AeroLeads, on the other hand, gives you exclusive features. It includes finding emails, phone numbers and B2B data using the Chrome and Firefox plugin. One can verify a number of email lists as well by exporting. Export the data to CSV or transfer data to Salesforce, HubSpot CRM, Pipedrive, Zoho CRM, FreshSales, Zapier, etc. with 1 click. 2,899,181 Prospects added by 57,901 Active Users till today, making it the best LeadIQ alternative in the market. It is one of the most powerful prospecting tools which discovers emails from organizations and the people in those organizations.

With AeroLeads you can:

Social media profiles of organizations, designation, place and so on.

Exporting all the information.

LeadIQ might have a huge database but the special features coming along with AeroLeads at such a low price can make anyone spellbound. Though it is quite difficult to completely reject one option when both of them have almost similar features, AeroLeads goes the extra mile. The pricing details are openly shared on the website, making it easier for everyone to decide and buy a plan. It is surely more flexible and instils confidence in the buyer through this transparency. The trial version is the best among all, giving an original taste of the paid version. With features such as Email Finder, Email Verifier and its availability on both Chrome and Firefox extension, making AeroLeads the best LeadIQ alternative.