Last updated on December 18, 2019 by Navaneetha in Sales

Myths about sales are widely held but they are just a false belief or idea. 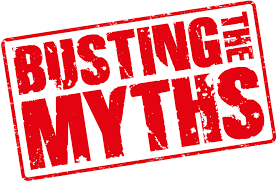 Well, not everyone would be a Jordan Belfort (portrayed by Leonardo DiCaprio’s character in ‘The Wolf of Wall Street’ ), who is seen building his career by lying and ripping off clients in penny-stock scams.

If you’re planning on starting a career in sales, the misconceptions about sales would make it a tough path for you. It should be noted that these misconceptions are developed by media and people who were not even part of the sales sector.

So feel free and join the sales sector by busting these

Many people assume sales to be a job done to get a temporary paycheck with no promotions. Also, many would consider sales to be that job which has no opportunities. This is very much a wrong interpretation.

According to an article in Entrepreneur, “85% of the company leaders and entrepreneurs in America today were once salespeople.” They carried sample cases, made cold calls, dialled for dollars, did product demonstrations and handled objections. Today, they’re the majority of corporate presidents and CEOs.

So would you still consider sales to be a dead-end? Maybe yes, if the end is at the very top of an organisation.

This has to be the biggest myth about sales. Everyone considers that a salesperson has an amazing talent to tell lies to get a buying decision from their client.

There could be few people, among the entire sector who abide by this myth but they would be considered as a bad salesperson. The reason behind this is that the salesperson has failed to earn that person’s trust. But generalizing this myth to the entire sales sector is just not right.

Sales, these days, revolves about creating and nurturing good business relationships. If you’re willing to say anything to make a sale, most potential customers will sense that and look elsewhere to have their needs met. Hence, not getting enough clients. Thus, this myth is just making the salesperson bad at sales.

Among the many myths, people assume a common myth that sales involve numbers and only numbers.

For example, one might think that sales involve- how many cold calls on the phone, how many in person, how many appointments, how many sales, etc.

This is considered wrong because sales is not purely a numbers game. Yes, it does involve numbers just like a doctor, musician or any other job and that is because everything involves mathematics and numbers. But sales is about research, information and relationships. Hence, sales are purely about people and their minds; more like a psychological job.

This is another example which tells people to not believe the myths. In the sales sector, no one can make a living by just being a fast-talking extrovert.

If the client doesn’t even understand what the salesperson is saying, that how do you expect him to make a deal? The client would also feel a sense of burden, inferiority and pressure since they aren’t able to pay attention to the salesperson.

Thus, a good salesperson is the one who listens and understands the client’s problems and finds the solution for it.

A good listener beats a fast talker any day of the week.

Myth 5: Let your prospects come to you

This is one of the obvious myths.

It would be considered nonsensical if one just sits in his chair and waits for his prospect to come before him and beg for the product.

Often, clients would do their research about the product on the internet but they would expect the salesperson to make the first call.

Myth 6: Close the deal at any cost

People assume that salespeople close every deal that they get; sometimes, even if it doesn’t make good business sense to the organisation. This is wrong.

If you are not making your desired gross profit on a particular sale, then you need to consider whether it makes good business to accept it. I know small business owners who will offer substantial discounts to a large company in the hopes of generating additional business from that client in the future. Unfortunately, they end up giving away their services and expertise because they don’t get any more business from that company. They neglected to negotiate an upfront agreement.

Hence, many salespeople, especially these days, accept a deal only if the deal is a good one.

Myth 7: Sales is the only job that has unavoidable ups and downs

Every job has its own ups and downs but none are unavoidable. Sales have ups and downs only if you don’t have goals and if there isn’t proper planning.

No matter what you hear, there really is no “bad” season. There is always an opportunity for salespeople who are committed enough to find it. For example, while your competitors moan about everyone being on vacation in July, you target people who are less likely to be away on holiday. This way you get through to them more easily, because there are fewer gatekeepers to contend with!

Sales only become a roller coaster ride if you let the process drive you instead of the other way around.

Myth 8: Salesperson must always be Professional

Well obviously, one must stay professional with your clients, but not necessarily act like robots.

A good salesperson must be human and connect with their clients on Facebook, LinkedIn, Twitter, etc. Salespeople who sell socially obtain 66% more of their quotas than those using traditional methods

Also, assuming that jokes have no place in a professional environment is another myth that must be broken.

After you have assessed the atmosphere in the room try relieving the pressure by adding a casual joke or remark. This could win you more clients as well.

Myth 9: Sales = all cold calling, all the time

Another one of the common myths. Well, this assumption is false for two basic reasons.

First, cold calling has become an easy part with the help of technology and the internet.

The general trend these days is for salespeople to work more closely with marketers (and use web-based tools) so they can target companies and individuals in a more specific way.

Second, the amount of time you spend making calls to potential clients varies considerably depending on where you are in your career.

Account Managers now say that when they first started as a Field Sales Executives, they spent a good amount of time making cold calls. But once they proved themselves and their ability to manage their clients, they were asked to handle more sophisticated tasks; thus gaining promotion as well.

Myth 10: You have to have the experience to sell more

Experience is not everything.

Building connections and networking is a great way to sell more but it is not required. There are various outlets (for example blogs, YouTube, Google, etc) that allow you to dive into and learn about the sales world.

Many times, we see people who might have just joined the organisation but they would have kick-started their sales right away; that too drastically.

If you are looking to learn how to improve your sales the key is more effort than connections. The more effort you put in to perfect your strategy the more deals you will close this coming year.

The myths listed here are not what make you an influential leader but your ability to inspire a shared vision, facilitate collective efforts to reach a common objective and identify as well as nurture the right talent.

One should realize that selling is an honourable career and sales professionals need to avoid falling prey to these myths.